GREENFIELD — Standing in what will eventually become a second-floor reading room dedicated to the artist Hale Johnson’s wife, Lorraine, Library Director Ellen Boyer said the city’s new library is shaping up to be “everything it was promised to be.”

“I’m not someone who can look at a plan. … I need to stand in a space to see what it’s going to feel like to me,” Boyer said. “And it feels amazing to me.”

The new library, located on Main Street, boasts 26,800 square feet over the current library ’s 15,000 square feet. It will include two public meeting rooms available for use after library hours, a “low-tech makerspace” for adult crafts, a cafe-like setup near the front entrance with a vending machine managed by the Massachusetts Commission for the Blind, two patios for patron use and a local history room, the contents for which are presently housed in the attic of the current library.

“The collection will finally come out of the attic,” Boyer said during a tour of the library this week.

The interior itself is nearly wall-to-wall glass, an intentional decision to allow site lines from one end of the library to the other, according to site supervisor Toby Brown of D.A. Sullivan & Sons Inc.

“From (the entrance on) Main Street, you’ll be able to see the whole library,” Brown explained.

Boyer said the children’s section will be on the first floor, with the teen and adult sections on the second. Also on the second floor will be a workspace with desktop com- 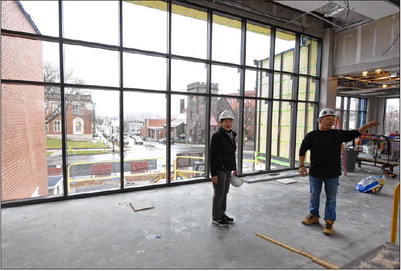 The second floor near the front of the new Greenfield library will have computers and a southern view down Hope Street. 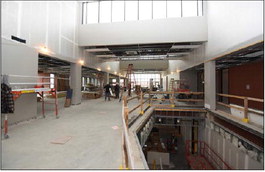 The spacious second floor of the new Greenfield library where the main stacks of books will be, with stairs coming up from the first floor.

puters, and for anyone without a laptop of their own, two will be available to borrow via a library card-operated vending machine.

“One of the goals for this building was (Americans with Disabilities Act) compliance,” Boyer said, referring to muchneeded improvements over the current library.

Library stacks will be better spaced to allow for more movement for wheelchairs or walkers.

In 2019, seven years after the vision for a new Greenfield Public Library was first discussed, Greenfield voters approved building a new library with a 61% positive vote. The $19.5 million appropriation accounts for construction costs as well the cost of the architect, project manager, furniture and fixtures, according to Library Building Committee Co-Chair Ed Berlin.

In addition to a $9.4 million grant from the Massachusetts Board of Library Commissioners, the Greenfield Public Library Foundation had said it would contribute about $2 million, reducing the city’s cost to about $8.1 million. The foundation recently announced it had reached its $2 million goal. The library is expected to be completed by spring 2023, according to city officials.

“We don’t have any real delays,” Owner’s Project Manager Daniel Pallotta told members of the Library Building Committee last month. “We had a couple of material delays that popped up this month. We’re not getting lighting packages until the first of the year. Some of our hardware, too, is delayed a bit. Nothing that’s going to delay the schedule of the library or the opening of the library, just internal delays.” Reporter Mary Byrne can be reached at mbyrne@recorder.com or 413-930-4429. Twitter: @MaryEByrne. 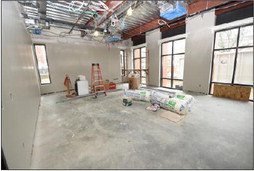 A small meeting room on the first floor in the front of the new Greenfield library on Main Street. 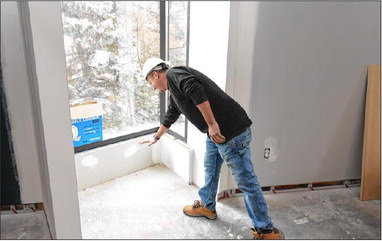 Site supervisor Toby Brown of D.A. Sullivan & Sons Inc. gestures where a window seat will be in the new Greenfield library. 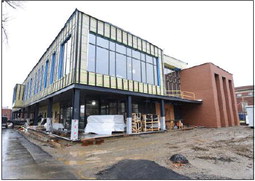 The front of the new library on Main Street in Greenfield.

Click here to see this page in the eEdition: